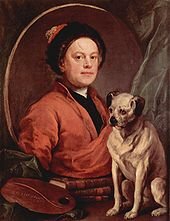 Many people know of Pug dogs but they do not understand how they came about.

There is evidence in ancient chinese documents of short-nosed dogs exisiting in China at the time of Confucius (around 700BC).  The short-nosed dogs were carried in carts whilst the bigger dogs followed behind their master's chariots.

They were considered imperial property, just like pearls and jade.  Emperor Ling, liked them so much that he gave the dogs rank, and the bitches were given the same rank as his wives.  He ordered the dogs to be guarded by soldiers and fed only the best meat and rice.  Any one who attempted to steal a dog were then sentenced to death!

The original Chinese name for the short-haird pug was lo chiang-sze and this was later shortened to lo-sze.  During the Yuan Dynasty (1206 - 1333AD) it was customary to parade the emperor's animals infront of his guests and the "golden coated nimble dogs" were presented right after the lions.  It is thought that it may have been at this time that they were introduced to Europe.

In 1572 The King of Holland (William the Silent) was at war in Spain, and one night he was woken by his pugs in time to avoid being assassinated.  (His pugs went everywhere with him!).  In 1688 the "House of Orange" appointed the pug to be the offical dog of the Dutch royalty (in much the same way as today Corgis are associated with our Queen).  Prince Willam came to England from Holland to Ascend his Throne, accompanied by his Pugs who attended wearing orange ribbons.

Around 1736 the Grand Master of the Freemasons made the the pug was also the secret symbol of "The Order of the Pug" (Mopsorden).

A well known pug called Fortune was owned by Josephine prior to her marriage to Napoleon Bonaparte.  It is reported that when they married in 1796 Napoleon refused to let the pug get the bed.  The pug reportedly bit the general on the leg and Josephone said if the dog could not say then neither would she!!  From then on it was 3 in the bed, wife, General and PUG!!