X rayed and clear of Hemivertebrae

Pixie has had some fantastic wins this year,winning several very large Limit bitch classes ,the high point being awarded the Reserve bitch CC at The Scottish Pug Dog show in June 2013,we are very proud of her achievements, she is our little star.

We bought Pixie in as a baby puppy, having been very impressed with her Mother when she came to be mated to Rupert ( C. Double 'O' Diggers), her early promise has not disappointed us, she has been a consistant show winner, gaining numerous Best Puppy awards at Open show level as a baby continuing her winning ways as an adult, qualifying for Crufts on most of her championship show outings.

She is  living up to her name, she IS a little Pixie, she has the most wonderful sense of humour and is always up to mischief.At shows, in the ring she shines, really enjoying the excitement and the chance to show off.

We love her to bits. 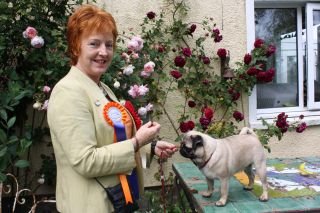